I happened to read another enjoyable book: Eejit by Andrew Hindle. 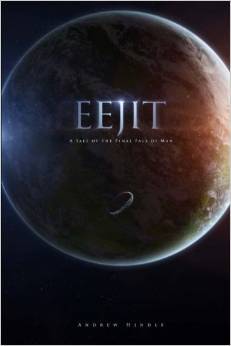 A quick spoiler-free synopsis is in order: A starship far from everywhere has an accident. Only a few crewmen survive, but they have a factory of clones to fill unmanned posts… Unfortunately, the factory is defective and churns out androids whose capabilities are randomized somewhere between a potato and an almost adequate crew member.

I found the premise most amusing. My first impression on the writing was that the style was very Pratchett-y. All conversations aimed for some degree of comedy while trying to maintain the seriousness of the situation. It didn’t always succeed, but often enough it did. The writer took every opportunity to crack a joke about the defective androids in particular.

There was quite a number of characters that got somewhat equal screen time. Chapters were divided based on who was the focus. There was some confusion, expecially in the beginning, since I wasn’t yet familiar with who was who. Near the end it wasn’t an issue anymore, but then again, that was already near the end and I couldn’t enjoy it for long.

Another point of criticism was the universe. Several alien races were mentioned and the history of humanity was vaguely referenced. I felt that I, as a reader, should have cared about those, but I didn’t. I only cared about the characters of the story.

I take this opportunity to point out that Eejit is actually book 1/8 of “The Final Fall of Man” series. I dare assume that the universe will be explored more deeply in the following books (all 8 books are available).

But enough nitpicking. The characters were great once you got to know them and the witty dialog really used their qualities. The plot remained interesting all the way to the end and I got a number of laughs reading the whole thing through. The interactions between the characters and the defective clones were particularly fun to read.

One thought on “Book Review – Eejit”